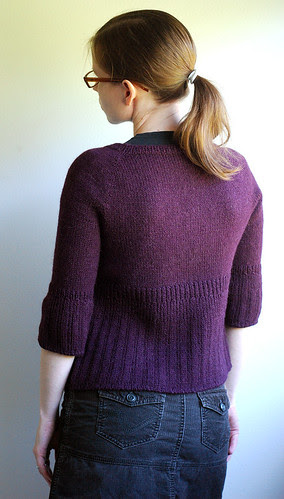 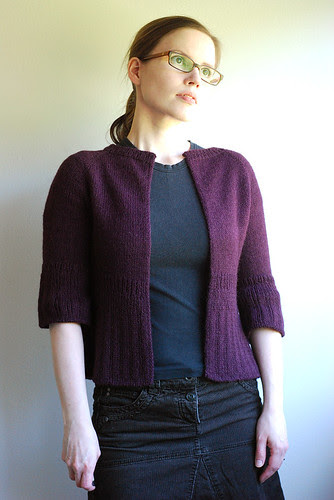 The Diminishing Rib Cardigan from the Spring 2009 issue of Interweave Knits. Based on other knitters' comments on their finished cardigans, I decided to knit at a tighter gauge than recommended and expected it to grow signifigantly during blocking. It didn't though, so it's a bit smaller than I expected. My stitch count is from the 35 1/4" size, but the dimensions are smaller due to the gauge difference. Sideways, I was able to stretch it somewhat, but the tightness of the slip-stitch I-cord edge puts a limit on how much you can stretch it lengthwise. I do like how neat the edging looks, though. And even though the tubular cast on was a bit tedious, and the tubular bind off didn't feel so much fun at first, either, I like how they look and will probably use them on future projects. Unlike many other knitters, I do not feel the need for any kind of closure for the front (possibly because mine is smaller than the cardigans that stretched too much).

Edited to add: Last night in bed I suddenly realized I forgot to mention the yarn and needles used. The yarn was Berroco Ultra Alpaca (in a shade called Gordoba Grape) and the needles 3.5 mm circulars.
Posted by Helena at 6:45 PM 5 comments:
Email ThisBlogThis!Share to TwitterShare to FacebookShare to Pinterest 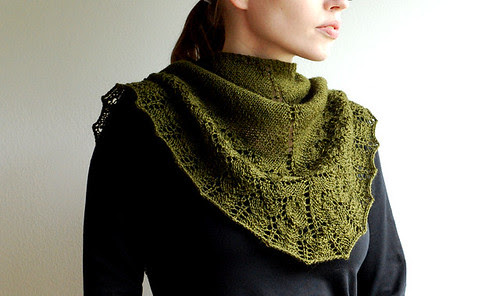 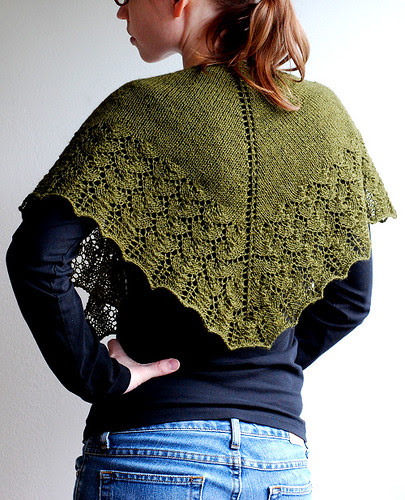 My second time knitting Ishbel by Ysolda (the smaller version both times). I liked the previous orange version so much I wanted another one in green, to match more of my clothing. I've been using the orange one as a scarf, and it's been very warm regardless of being so thin and lacy. I've been working on this intermittently in between different sock projects, so it took a lot longer to finish than it would have otherwise, since it really is a quick knit.

The Ravelry project page
Posted by Helena at 4:17 PM 2 comments:
Email ThisBlogThis!Share to TwitterShare to FacebookShare to Pinterest 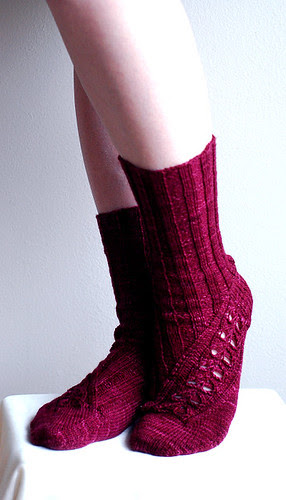 Finally I have a finished pair of socks to blog about! I've been working on two pairs at the same time, so I've been slower than normal about having one ready. These are knit from Cookie A's new book Sock Innovation, the pattern is called Kai-Mei, and it's my second finished pattern from that book so far. I knit these as a part of a knit-along in the Sock Innovation group on Ravelry. The yarn I used was Fleece Artist Merino 2/6 that I got in a yarn swap with Chris in Canada. I like the yarn a lot, it's just the right amount of semi-solid, and it feels like velvet. The needles I used were some 2.25 mm HiyaHiya DPNs I bought recently. I liked them a lot, too, they are light-weight.