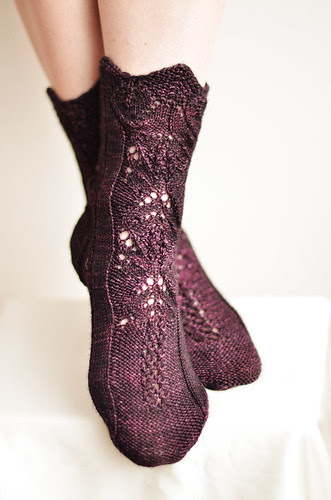 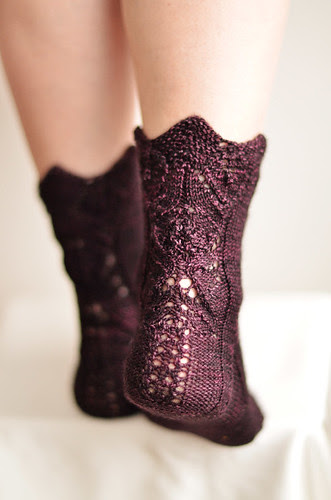 In the past few weeks I've been working on three different projects, and now they are all being finished within a few days of each other. This one is the January 2012 Mystery Sock at Sock Knitters Anonymous by Irish Girlie Knits Designs, which I've knit during four Sundays in January, on each of the days that one of the four clues was released. The nice thing about mystery socks is that when you only have a part of the pattern at a time, even a more complicated design doesn't feel overwhelming. This is only my second time completing a mystery project, and it was a nice experience. It was my first time working with madelinetosh tosh sock, which was also a pleasant experience. A soft, non-splitty yarn in a beautiful colorway called Duchess. I see a future for myself and more tosh sock.

The Ravelry project page
Posted by Helena at 10:50 AM 4 comments:
Email ThisBlogThis!Share to TwitterShare to FacebookShare to Pinterest 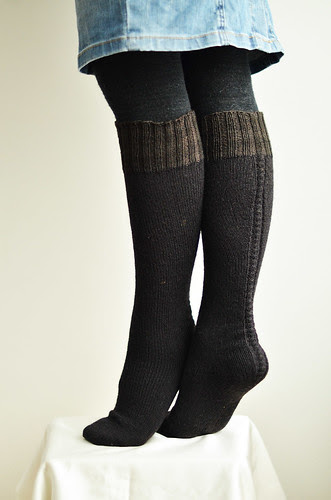 Originally these socks were supposed to be my entry to the Solid Socks January KAL for a black, white or gray pair while, at the same time, using up some stash from 2007. However, as I was knitting the first sock I realized the black ONline Linie 3 Supersocke 100 was not going to be enough on its own, so I had to use another yarn for the ribbing, Lorna's Laces Shepherd Sock Solid in a colorway that has a brown tint. So, no official KAL entry this time, either, but I was glad to be able to use two yarns that previously hadn't particularly inspired me. Using up old stash gives me a satisfying feeling, even if any amount of yarn knit will likely be replaced by twice the amount of new yarn.

This was my second time officially using Laura Chau's Delicious Knee Socks pattern, even though I've used the basic stitch amounts as a guideline for some other knee socks I've knit. It's a very nice generic toe-up knee sock pattern that comes in various foot and calf sizes and two different heights: regular knee socks and an over the knee version. I will likely be using it in some form in the future, as well, possibly substituting the heel with something else. I knit these with 2.0 mm needles at a pretty tight gauge, but with the mostly stockinette stitch pattern, with just the one cable in the back, they didn't they too long to finish. Since these will be mostly worn over wool leggings, the hiking down problem with some knee socks shouldn't be an issue.

The Ravelry project page
Posted by Helena at 3:27 PM 7 comments:
Email ThisBlogThis!Share to TwitterShare to FacebookShare to Pinterest 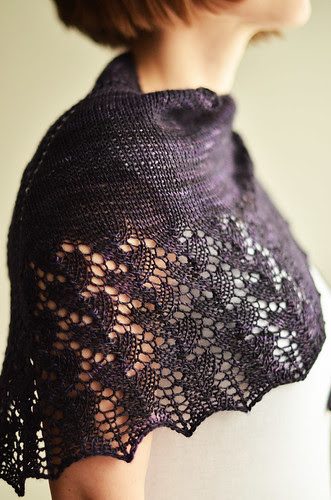 This shawl was supposed to be my first entry to the 12 Shawls in 2012 knit-along on Ravelry, but it turns out it's 8 meters short of the required 250 meters of yarn used for qualifying shawls. Nevertheless, I'm quite satisfied with it. The yarn, CASSIOPEIA fingering weight singles by Pigeonroof Studios, is a great yarn for shawls. It has very nice drape, a beautiful sheen (possibly created by the small amount of silk in it), it's very soft to touch, and the colors are lovely. This particular colorway is called Black Violet, and I like it how there is subtle variation in color, but not too much to dominate over the pattern. I have ordered some of the laceweight equivalent to use on larger shawls, and I'm interested in seeing how those will turn out.

I'm still lacking an official entry to the 12 Shawls in 2012 challenge, and I'm anxious to have at least one by the end of January, so I see another smallish shawl in my near knitting future.

The Ravelry project page
Posted by Helena at 7:16 PM 7 comments:
Email ThisBlogThis!Share to TwitterShare to FacebookShare to Pinterest 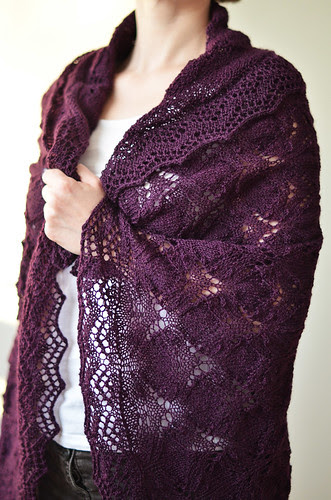 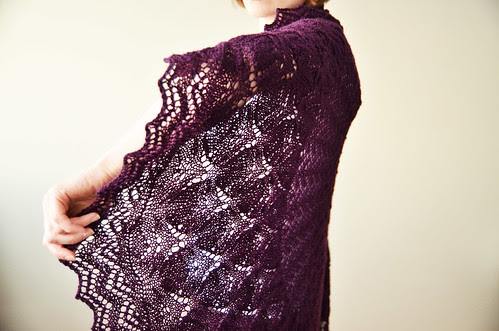 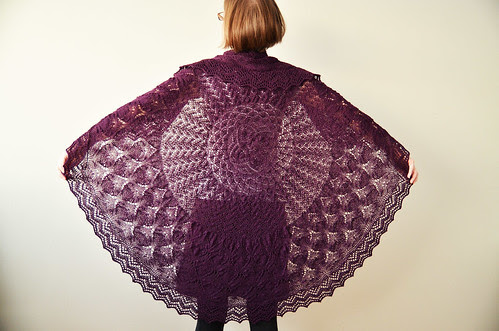 My first finished project of the year, Jared Flood's Leaves of Grass, is also one of my favorite shawls ever, although this does not count towards the official 12 shawls in 2012 challenge, because I started it in December. However, it was so enjoyable to knit that I don't regret starting it too early.

As I expected, it was very similar to Girasole in construction, all the way down to the knitted-on edging. As I also expected, the edging, which used up 20% of the total yarn, was my least favorite part of this project, but it was still more enjoyable than that of Bridgewater, and also, for some reason, a lot easier for me to memorize. For the majority of the edging I only needed to glance the chart every once in a while, in those moments of temporary amnesia when a part I'd repeated tens of times was suddenly escaped my consciousness. Overall the various charts used in it were easy to memorize row by row, so, for the circular rows, I only needed to check the chart at the beginning of each row, which in chart D meant only once in every 580 stitches. The stitch patterns are also very "logical" in the way that the previous row gives you plenty of clues what's going to happen next. All in all, I'd consider this easy as shawl patterns go. I really love knitting circular shawls, and I think there will be a few more coming this year. But I think whatever I'm knitting next will be sans knitted-on edging, though.

I used my trusted shawl yarn, Ohut Pirkkalanka by Pirkanmaan Kotityö Oy. I used the same yarn for both Girasoles, this time in purple. This shawl feels quite a bit stiffer than the Girasole I've been using for three years, which probably means it'll limber up over time. The stitch pattern would probably benefit from more aggressive blocking, since the bottom of the chart D part looks a bit bunched up, but I'm not sure I want the shawl any bigger. I did use 1368 meters of yarn, which is over a 100 meters more than the pattern estimate. Based on my previous experience I knew to expect this, though. I recommend for all those knitting this pattern to buy more yarn than the recommended amount. Someone on Ravelry is knitting this with the official pattern yarn LOFT, and instead of the 5 recommended skeins it looks like she'll need 7.

I definitely recommend this pattern, and I'm surprised there are so few projects so far on Ravelry, compared to many other Jared Flood shawl patterns. It's beautiful, easy and enjoyable. Definitely in the top three of the most beautiful shawls in the... room ;).

The Ravelry project page
Posted by Helena at 12:25 PM 17 comments:
Email ThisBlogThis!Share to TwitterShare to FacebookShare to Pinterest


The response to my previous post about the needle giveaway has been overwhelming! I think it has attracted the most traffic to my journal in its 3-year history, and certainly the amount of comments was unpreceded. Over a hundred people have expressed interest in one or more of the sets of needles available. To keep track of who wants what, I created an Excel spreadsheet, listing all the names of the interested people for each set. The most popular set turned out to be the KnitPro Symfonie Rose Interchangeable Set with over 50 "applicants". To determine the winner, for each set of needles separately, I used an online random number generator. The winner of each set is listed below. Some people asked to be considered in an order of preference for different sets, but that was not possible. Each person who was interested in a set of needles had equal chances of winning it. Now, I ask all the winners to contact me via email at ignorant.bliss@gmail.com, letting me know which address the needles should be sent to. I ask you to do this no later than Friday January 13th. I will reply with a confirmation to the email within 24 hours, so that you know I received your information for sure. If I don't hear from a winner by Friday next week, the set(s) in question will be randomly assigned to one of the other people who expressed interest.

For the record, I am not quitting knitting! I'm only giving away the needles I would not be using in the future. Since many of you asked, the needles I'm keeping include KnitPro Nova, Signature Needle Arts and DyakCraft DPNs and fixed circulars. I'm also expecting to receive some DyakCraft interchangeable needles in the coming months, but the wait on them is pretty long at the moment.

I hope all the winners enjoy their needles, and I hope the non-winners aren't too disappointed! There were so many of you that most were bound to not win anything, which is a bit sad. But this has been so much fun for me that I'd consider using the same kind of method for destashing yarn, for example, some time in the future.

Posted by Helena at 8:41 AM 8 comments:
Email ThisBlogThis!Share to TwitterShare to FacebookShare to Pinterest
Newer Posts Older Posts Home
Subscribe to: Posts (Atom)