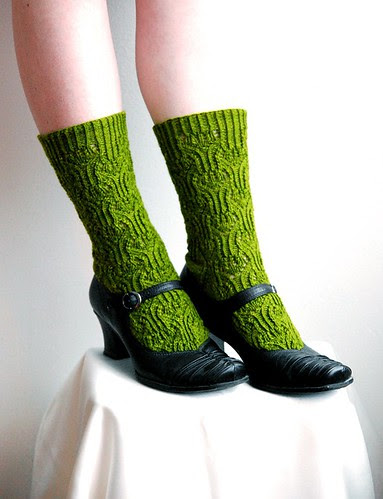 Most of my knitting projects don't really have stories, but this pair of socks has as much of a story as you'll ever get from me, I suppose. I cast on the Rosebud Socks pattern by Wendy D. Johnson in Canada during a trip to visit a friend. Upon my return to Finland I had an obligatory five-day break from the project, first due to two days of traveling (which was really only supposed to be one day, but I got stuck in Amsterdam for an extra day due to the chaos caused by the snow), and then for an extra three days since my luggage, including this knitting project and a bunch of yarn I purchased on the trip, was delayed. When I finally received my suitcase I was just very grateful it didn't get permanently lost, considering there must have been thousands of other bags stuck at the airport, as well.

This was my first time knitting with Wollmeise, and while the colors are very nice, I don't really get what makes this yarn so special. It's quite splitty for a sock yarn. I've been interested in trying for some time, due to its popularity, but since it's so difficult to acquire from the online store, which is out of stock most of the time, I figured my only reasonable way of getting it would be another knitter who wants to get rid of hers. I found an American knitter who was selling two skeins of Sockenwolle 80/20 Twin on Ravelry in a color I liked, and had her ship them to my friend's place in Canada, where I would be visiting soon. It worked out fine, but I don't think this yarn is quite worth the effort!

The Ravelry project page
Posted by Helena at 6:02 PM 6 comments:
Email ThisBlogThis!Share to TwitterShare to FacebookShare to Pinterest 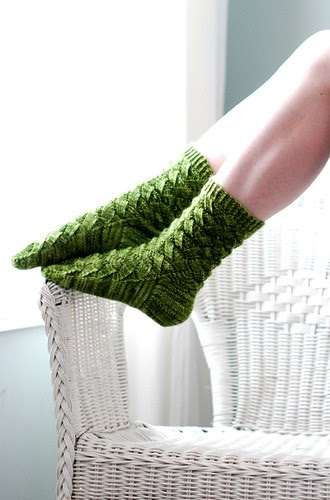 It may be hard to believe, but this was my first time knitting the Monkey pattern. I have to admit I have no idea why it's so hugely popular, apart from the fact that it's free. It was certainly an easily memorized pattern, but I don't see anything that sets it apart from many other sock patterns. Any way, I thought the Fleece Artist Nyoni I had sitting in my closet would be a suitable yarn for this project. It's at the upper end of degree of variegation I can tolerate in a yarn, and Monkey seemed like a pattern where I could take advantage of that. I think the pattern-yarn combination works pretty well, but I'm not ecstatic about the end result. Maybe blocking would improve it. I don't normally block socks because they "block" just fine in regular use, but this pair might benefit from it.