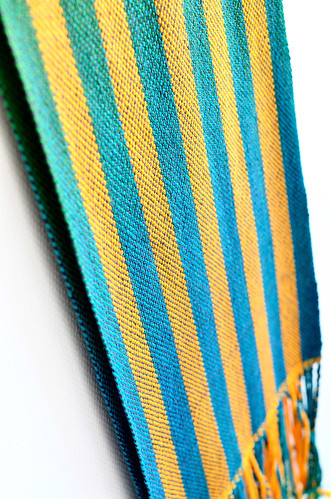 After I'd put away the loom for a while because my interest in weaving had waned, I saw photos of striped and pooled woven scarves, and felt I had to try making one myself. I used Wollmeise Pure in the Skarabäus colorway as the multicolored yarn, and Küken as the solid. Skarabäus is a pretty "mild" colorway when it comes to multicolors, and the color changes don't stand out as much as with some of my previous pooling scarves, but overall I like the striped look. It makes the scarf look longer and gives it visual structure. I think my future pooling scarves are now going be more or less striped. I have some ideas for using two different multicolored yarns on the same scarf for a stripy effect.

I didn't know until recently that the name of the colorway Skarabäus refers to a beetle, scarab. Now I like the colorway even slightly more than before because of that.

The Ravelry project page
Posted by Helena at 9:24 PM No comments:
Email ThisBlogThis!Share to TwitterShare to FacebookShare to Pinterest 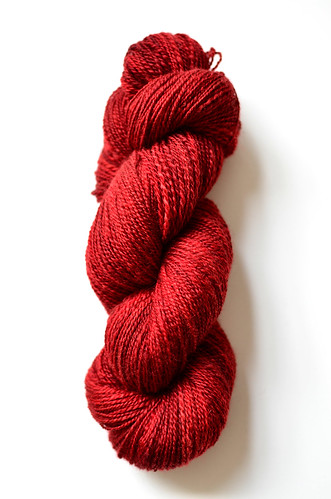 The first handspun skein of yarn that I'm actually happy with it! We're also approaching the kind of thickness of yarn that I can imagine doing something with. It's about 310 meters out of 116 grams of fiber, which sounds thicker than it looks, probably due to the density of it.

There was a lot of progress made during the several days of spinning and then plying this yarn, and the first ply was overspun in places, with more unevenness in thickness than the second ply. I quite like the color, although I can't wait to spin some gradient or other multicolored yarns.

I'm planning on using this either on a cowl or a small shawl. I plan on spinning some more 2-ply yarn for a pair of colorwork mittens, but I also can't wait to try navajo plying in the near future.

The Ravelry project page
Posted by Helena at 5:10 PM 2 comments:
Email ThisBlogThis!Share to TwitterShare to FacebookShare to Pinterest 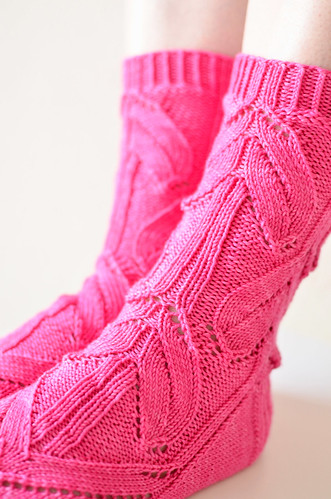 I'm a bit behind of my intended schedule for the 26 Pair Plunge, but here is my pair #2. From Cookie A's Sock Club, I found one of the June patterns appealing. However, I often don't feel like using the club yarn for that particular month's patterns, because I have this silly desire to not knit the exact same thing as many other people. I chose Wollmeise Twin in the Tutu medium colorway, because I felt pink was missing from my current everyday sock collection, and because I've really been warming up to Twin recently. I do love the club yarn, also, and I plan on either knitting another pair of socks with it, or using it on a non-sock project, since it's exactly my kind of a color.

The Ravelry project page
Posted by Helena at 5:42 PM 8 comments:
Email ThisBlogThis!Share to TwitterShare to FacebookShare to Pinterest 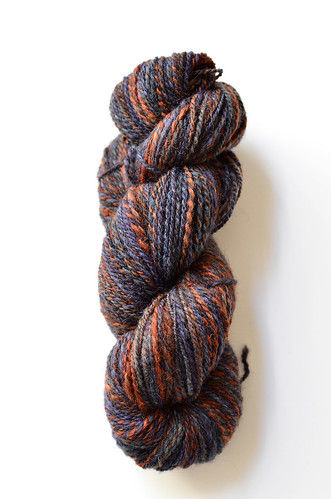 I did feel my worsted spinning technique was more polished than it was at first, although there still was a fair amount of accidental thick-and-thin spinning going on. It also seems like this turned into a reasonably balanced yarn. I'm not so crazy about the colors; I think it would have looked nicer with less mixing, but I didn't have the capacity to worry about exact color sequences just yet. The single plies and the yarn out of Shetland Humbug felt fairly coarse at first, but washing really softened it up. The yarn is also surprisingly lofty, so I think I did an OK job not overspinning it.

The Ravelry project page
Posted by Helena at 7:20 PM No comments:
Email ThisBlogThis!Share to TwitterShare to FacebookShare to Pinterest 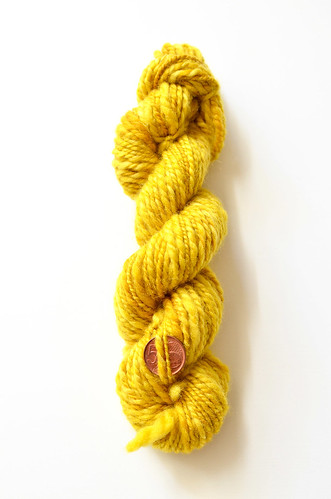 It was inevitable that sooner or later I would start spinning yarn. The idea has been brewing for years, and in 2009 I briefly tried spinning some yarn on a spindle. Then I accidentally stumbled upon a new Finnish book about spinning while browsing the craft section at a book store, Kehrääjän käsikirja by Tuulia Salmela. That was the final push I needed. I dug up my spindles and bought some fiber.

I meant to keep practicing on the spindle a bit longer, but then the spinning wheel I ordered arrived faster than expected, and of course I couldn't not try using it. I did not have a chance to try out different wheels to see which one I'd like the best, but I knew it should be a model that's easily moved and stored, because I don't have the space for a dedicated spinning area in my apartment. The Ashford Joy 2 was available via a Finnish online shop, so I quickly decided on that. I picked it up from the post office on Friday and set it up right away.

While my first spinning project didn't turn out exactly as I visioned, the problem was mostly with my inexperience and not with the wheel. I found the wheel easy to set up and work with. I just wasn't sure which spinning ratio to go with, since I had no experience on how all the factors would affect the outcome. I was aiming for a worsted spun yarn, but my technique wasn't exactly polished at that point. My inexperience also shows in how uneven the yarn turned out, but I suppose that's to be expected from a first spinning project. My second project that I'm now in the middle of is turning out a lot more even, and more the thickness I intended.

So, there is now going to be a fiber stash in addition to the yarn stash, which is already getting to the point I can't store it in a way it's not obvious I have a problem. My current fiber stash is a moderate one week's supply, but I have a feeling it's going to grow exponentially from here.