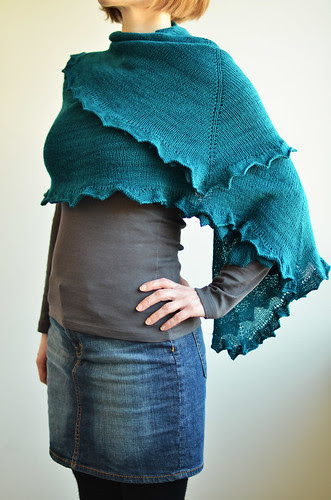 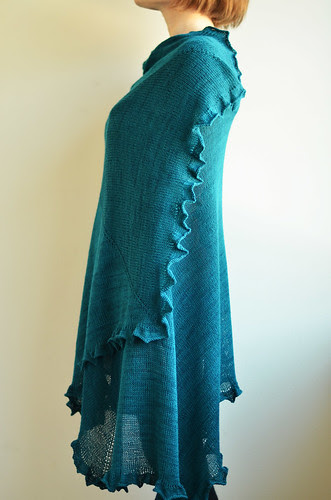 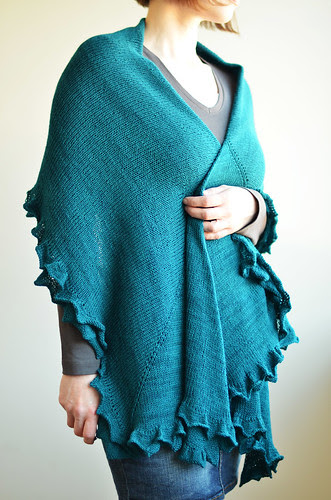 1559 meters of yarn and thousands of simple knit stitches turned into this delightfully modern shawl. It's basically a very simple pattern, Nuvem by Martina Behm, and the challenge comes from the sheer number of stitches, not from complexity. The size and construction also require more needle than your average shawl. It's started from the middle with Judy's Magic cast-on, which I did with two 40" (roughly 100 cm) circular needles. When the narrow ends were rounded enough, I switched to just one 40" needle, which was just enough until the beginning of the ruffle, which doubles the amount of stitches. At that point I switched to a ridiculous 80" (about 205 cm) circular needle which I custom ordered from Signature Needle Arts some months ago when I first started planning on this project. That many stitches meant that each round of the ruffle took about 1½ hours to complete, and the bind-off took almost 3 hours. Moving the stitches around that kind of a circumference started to be a bit of a drag, literally. I think a stiffer and more slippery cable would have been better suited for this purpose, but it was manageable.

The yarn is Wollmeise Lacegarn, a turquoise skein labelled Neptun dark under the We're Different sticker. The shawl took up most of the 300 gram skein with just 8 grams remaining. Tackling the 1600 meters of yarn in one single skein was a challenge on its own. I managed to wind it into one solid cake, but barely. The plastic yarn winder was making some sounds of protest, and, when tightly wound, the skein almost touched the yarn guide in the end. After that experience I placed an order for a more heavy-duty winder to cater to my growing collection of Wollmeise Lacegarn.

The Ravelry project page
Posted by Helena at 3:48 PM 12 comments:
Email ThisBlogThis!Share to TwitterShare to FacebookShare to Pinterest 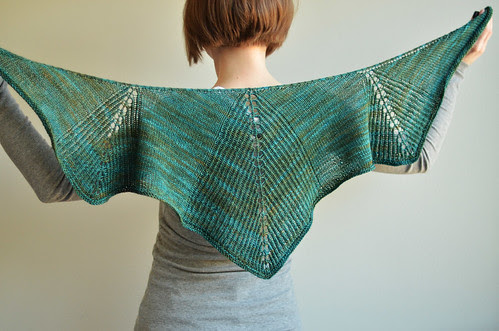 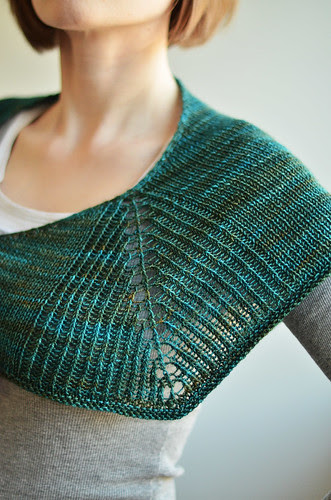 Neither my favorite knitting experience nor favorite finished item, but the third shawl qualifying for the 12 shawls in 2012 challenge is finally done. I wasn't aware until I started Stephen West's Herbivore pattern how many purls through back loop it would require. Purling through back loop is one of my least favorite things in knitting, so I worked on this only a couple of rows at a time, in between working on other projects, which is why such a small shawl took over a month to finish. Since the usual way of doing a ptbl is practically impossible for me to perform, what I do instead is first twist the stitch on the left needle and then purl it the regular way.

At least I finally found a way to knit up the madelinetosh tosh sock I received from a sock yarn club last year. Of the three shipments in that club, this was the only one I could imagine knitting with, even though it, either, is not exactly something I would choose to buy myself. Based on that experience I made a decision that it's probably better for me not to take part in similar surprise yarn clubs in the future. As if I already didn't know it, I'm quite picky about certain things, of which one is yarn. I generally don't care for variegated yarn, and especially not self-patterning yarn, and I'm also particular about the kind of colors I like to knit with. Surprisingly, though, I have yet to be disappointed in the yarn in Wollmeise grab bags, but with those I'm at least able to specify I want semi-solid colors.