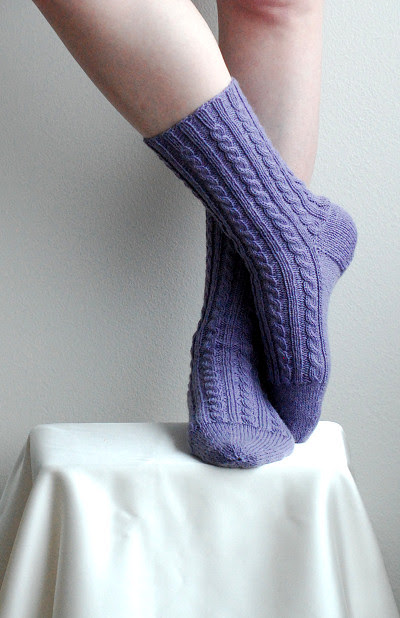 Inspired by a Cookie A. KAL on Ravelry, I decided to knit this pair of socks for my BFF to replace the failure that was the pair in the previous post. How convinient: BFF for the BFF! Pastel colors aren't usually my thing, but I got an urge to knit something with lavender colored yarn, and I think the pattern and yarn make a good couple here. It was a pleasant knit, with Kirjo-Pirkka (again) and 2.25 mm DPNs. The socks are also nice and stretchy and therefore forgiving with gauge irregularities. I think my gauge was a bit tighter than in the pattern, and having expected that, I chose size medium instead of small, and it turned out fine.

The Ravelry project page
Posted by Helena at 10:05 PM 3 comments:
Email ThisBlogThis!Share to TwitterShare to FacebookShare to Pinterest 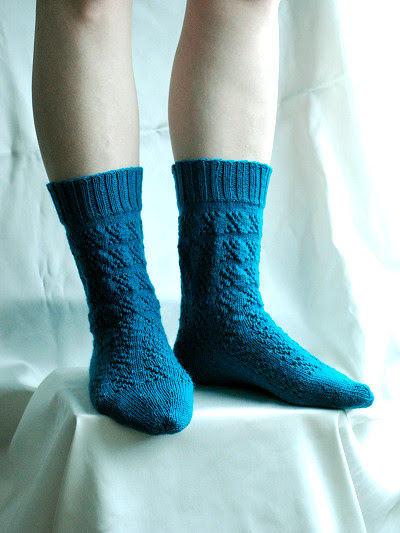 Fail! I've delayed blogging about my second pair of socks for this year, because they were such a failure. They're based on the pattern Child's Sock in Miranda Pattern from Knitting Vintage Socks, with the modification of switching the toe to a round one. The yarn is Kirjo-Pirkka and the needles 2.0 mm. These were originally meant to be a gift to a friend, but I don't feel giving someone something I consider a failure. Why a failure? While the foot is almost too tight, the leg is way too loose, and has a weird bulge at the back of the ankle caused by calf decreases that, in my opinion, are placed way too low. I'm apparently not the only one with this problem. If I were to knit these again, I'd either start with fewer stitches, or make the leg longer by adding pattern repeats after the decreases, so the shape of the leg actually fits an average adult female's leg.

The Ravelry project page
Posted by Helena at 7:31 PM 1 comment:
Email ThisBlogThis!Share to TwitterShare to FacebookShare to Pinterest 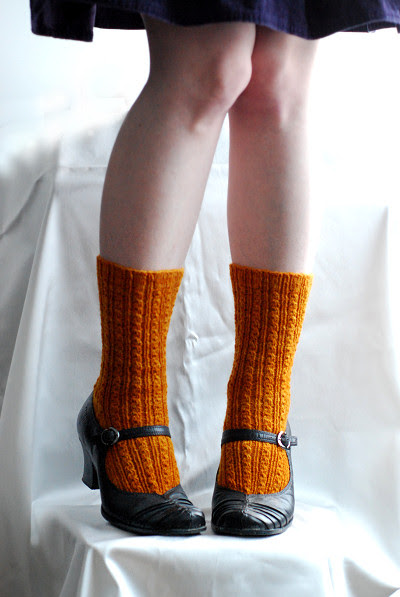 The knitting year is off to a good start! Inspired by the January KAL in the Sock Knitters Anonymous group on Ravelry, I decided to knit the Conwy pattern from Knitting on the Road by Nancy Bush. The yarn is a local ecological yarn called PukkIlu from Handu, in colorway Totinen tyrni. I have placed an order for four more skeins of this yarn in different colors now! There was a store update today, but it looks like it's almost sold out already. I'm not surprised! The needles were 2.5 mm HiyaHiya steel DPNs. The size turned out perfect.