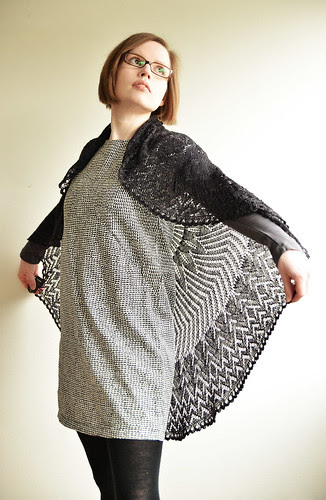 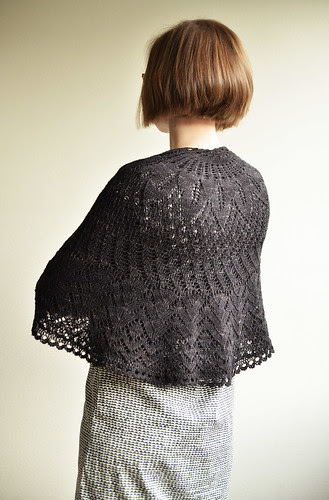 My third Girasole has been a year in the making. Last April, when I posted pictures of my second Girasole, my online friend Minati asked if I'd be interested in making a black one for her in exchange for some handmade jewerly (she can make all kinds of awesome things out of metal and other materials). I said I'd consider it, but knowing how promising to knit something specific usually makes it feel more like a chore than a relaxing pastime, I said there was no guarantee. After I made the decision to knit 12 shawls in 2012, I figured it makes sense to combine these two plans, so I asked her what kind of yarn she would prefer. She said she would like it to be delicate, something she could wear to a fancy restaurant, which made me turn to something luxorious and laceweight. I had just ordered some yarns from the Cassiopeia line at Pigeonroof Studios' Etsy shop, and figured the delicate merino/cashmere/silk blend would be perfect for this purpose. She didn't have any available in black, but I asked her if she could custom-dye two skeins for me, and she did, in one of her regular colorways called Soot.

The actual knitting started in mid-February, and I've been working on it a little bit here and there, along with some other projects. I've been moving away from the monomaniac knitting of just one project from start to finish to a more relaxed and varied pace, with my time divided between several projects in various stages of completion. I never thought of myself as a "promiscuous" knitter, but so far I'm enjoying it. I don't as easily get sick of one project if I can switch to another one for a while and then get back to it again.

I think I prefer the Girasole in a laceweight and drapy yarn like this. If I ever knit a fourth one, which isn't out of the question, it's definitely going to be laceweight. After the third time of knitting this, I still think it is a genius pattern. It's easier than it looks, while never boring (except maybe at the end of the edging). Before you get bored of repeating one stitch pattern, it moves on to the next section. Each round is easily memorized, so you don't have to be looking at the pattern all the time.