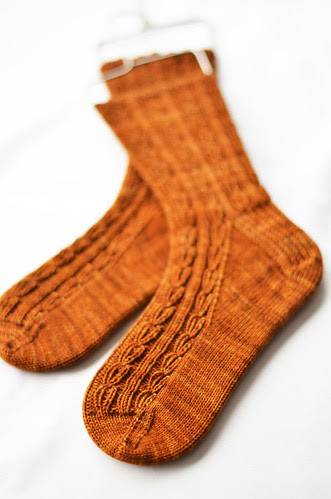 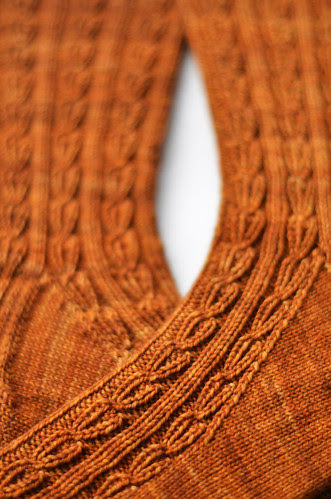 My first Cookie A pattern knit as a legitimate sock club member. I did not go with the club yarn, because I felt the dye lot of the yarn I received (there were a few different dye lots, some more variegated than others) was not solid enough for this pattern, so, instead, I chose Cephalopod Yarns Skinny Bugga! in the colorway Bronze Moth. I think the pattern and yarn work well together. This was the easier of the two patterns for February 2013, because the pattern repeat is easy to memorize, but I'm going to knit both patterns, anyway. I have an ambitious plan to knit each of the 12 patterns in this year's sock club.

I knit the majority of these socks Magic Looping my new DyakCraft 5-inch Heavy Metal interchangeable needles, and these are best needles so far I've used for this technique. I also learned of a trick to use a smaller needle in your left hand to make it easier to push the stitches around, since the size of the right-hand needle is the only one that matters for gauge, so I used a 2.00 mm needle on the left and a 2.25 mm one on the right.

The Ravelry project page
Posted by Helena at 6:26 PM 10 comments:
Email ThisBlogThis!Share to TwitterShare to FacebookShare to Pinterest 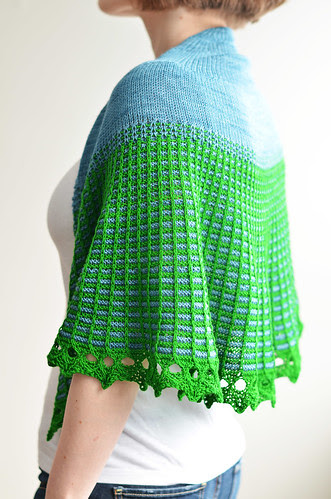 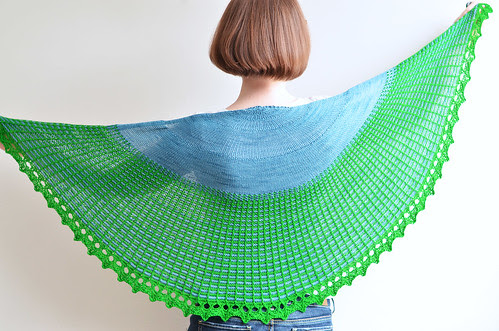 I really enjoyed knitting Romi Hill's Carson pattern (except maybe for the lace edging, when I just wanted to be done already, there were so many stitches on one row). The way the two-colored section works is so genius and simple at the same time. I think I want to knit this pattern again, with a different color combination. Choosing Wollmeise Pure in colorways Wolke WD and Grashüpfer WD (both colors I received in a grab bag as surprise skeins, neither color necessarily being something I would have chosen myself originally) may have been a surprising move from me. I really enjoyed knitting with these colors, but I have to say the finished shawl, while pretty, is probably something I will not end up wearing myself. It will likely end up being gifted to someone who is more comfortable wearing this color combination. That's fine, though. If I really end up knitting 12+ shawls again this year, I don't think I need that many new ones for myself, anyway.