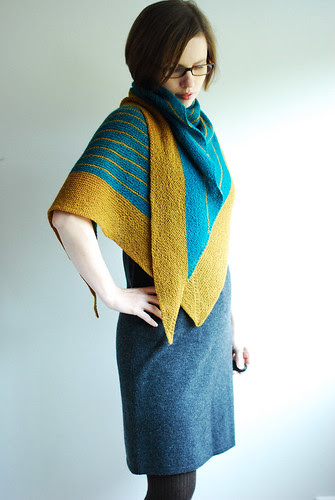 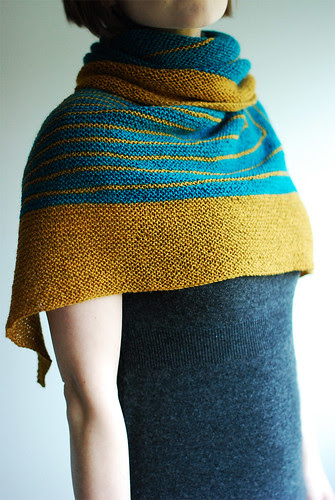 More Veera Välimäki designs! Supporting a fellow Finn, I went for her Stripe Study Shawl. This is actually a fairly patriotic finished object, since also the yarn, Ohut Pirkkalanka by Pirkanmaan kotityö, is local, in fact from the same town I live in. I have, umm, should I say, a moderate selection of colors of that yarn in my stash. Choosing the color combination was a challenge, and I'm not 100% sure I made the right decision. I like the shawl as it is, but it may not be that wearable. I think replacing the teal with the green option that made it to the top three colors may have been a more practical choice. Well, who's to say I couldn't knit another one with different colors!

This was very enjoyable to knit, and a pretty genius construction with the short row stripes. In fact, I would love to knit another one.

The Ravelry project page
Posted by Helena at 7:50 PM 5 comments:
Email ThisBlogThis!Share to TwitterShare to FacebookShare to Pinterest 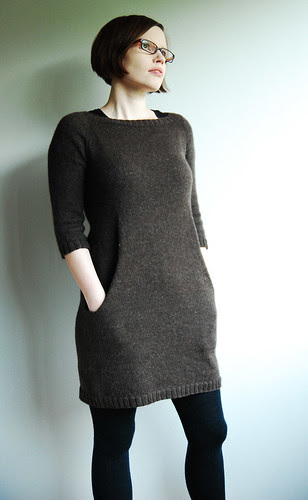 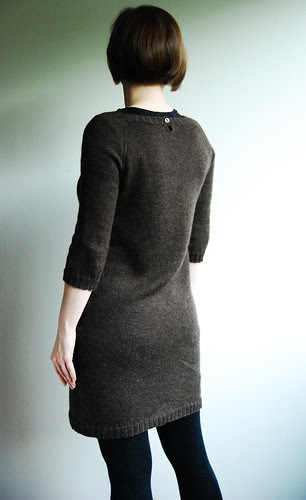 This project started with the most thorough preparation ever: swatching with not just one but three different yarns. Besides checking for gauge, I wanted to make sure I chose a yarn that produced the right kind of fabric. Alpaca Silk by Hjertegarn created a surprisingly scratchy fabric. Drops Alpaca was softer, but I was afraid it would stretch out of shape too easily, both based on the blocked swatch and previous experience. So, I settled on Hjerte Cashmere by Hjertegarn, a merino/alpaca/cashmere blend that was both soft and sturdy. I figured that if I'm going to make this kind of a commitment to stockinette stitch, I'd better make sure it's not wasted on the wrong kind of yarn.

Three weeks of knitting and 1476 meters of yarn later, it's done. The pattern is the Still Light Tunic by Veera Välimäki. The color of the yarn was not the most exciting to knit, but it was a choice based on what I'd actually want to wear, and I still like it, after three weeks of knitting. And the fabric is exactly what I wanted, soft and slightly fuzzy, which is why I didn't use sock yarn unlike many other knitters. Less stitch definition and more fuzziness was what I was after and what I also got. After the success of this project and Cria, I'm a total swatching convert. It's so much more satisfying to end up with the kind of product you envisioned rather than something less so.