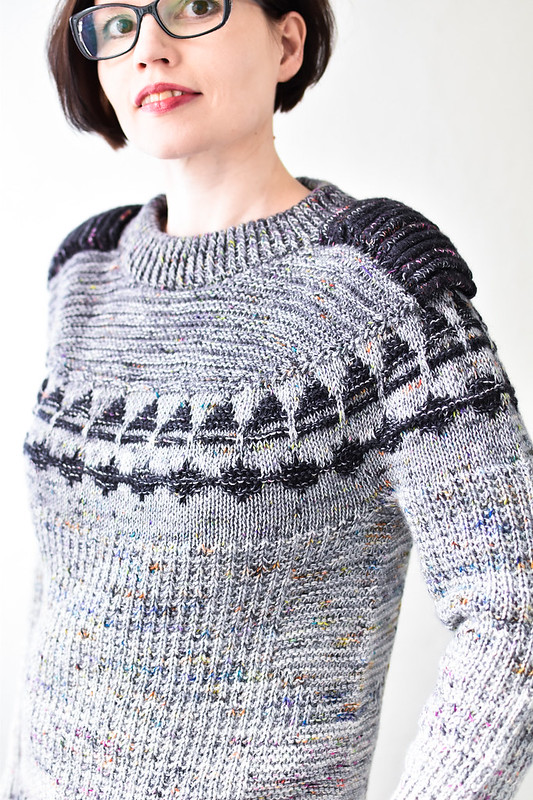 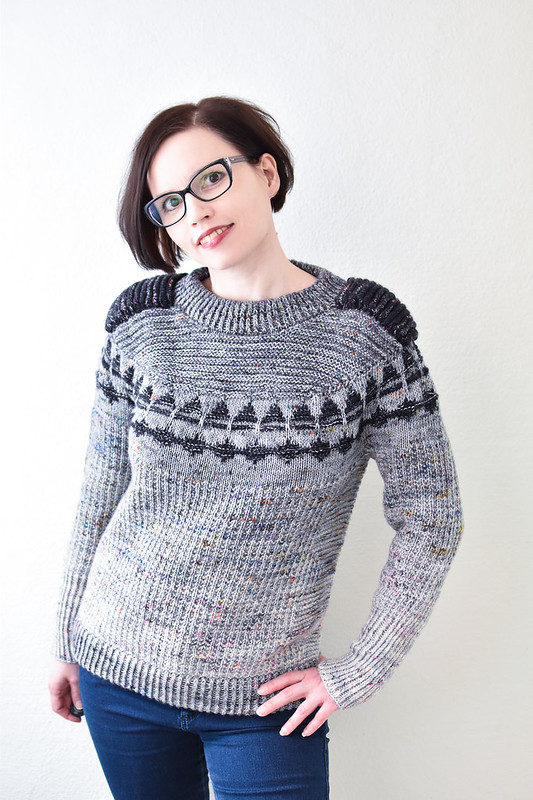 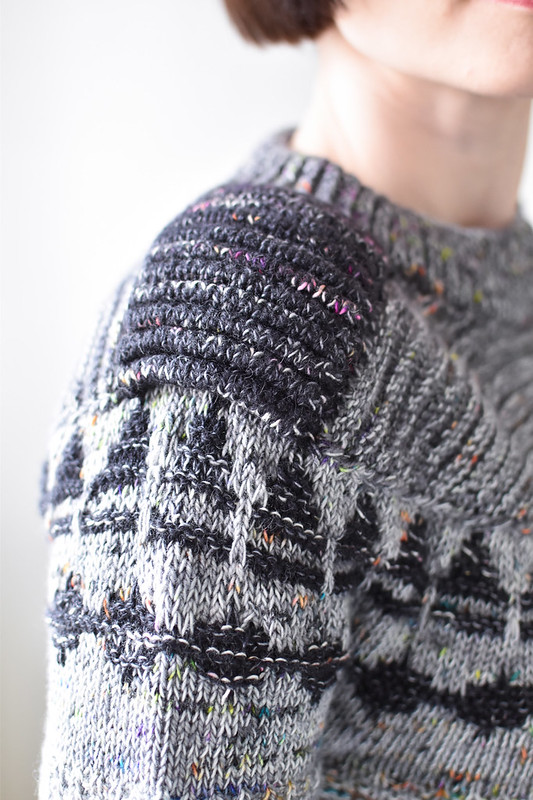 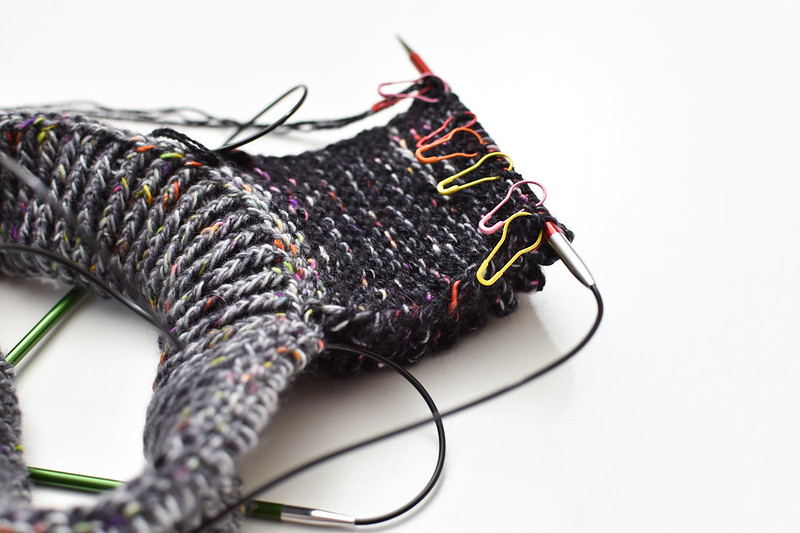 Back in January, when the opportunity arose to test knit a Stephen West sweater with welts, I was like, heck yeah. The deadline also seemed like a very forgiving distance away, not that it ever means I will finish a project ahead of time, be it a test knit or a lecture.

Fast forward to the day before the pattern launch, and I still have the second sleeve to knit. Blocked the sweater overnight and through a day of work, but the welts still aren't completely dry as I'm writing this blog entry. That doesn't stop me from wearing it, though. I have to say the welts were not my favorite part of this project to knit, and I had to use some markers to be able to pick up the correct row of stitches since I knitted all the welts in the same color. However, it was worth it! The rest of the yoke was easier, and then the broken rib (and garter stitch) for the rest of the body and sleeves was pretty relaxing.

Despite the excentric construction, it's extremely comfortable to wear!
Posted by Helena at 6:46 PM No comments:
Email ThisBlogThis!Share to TwitterShare to FacebookShare to Pinterest 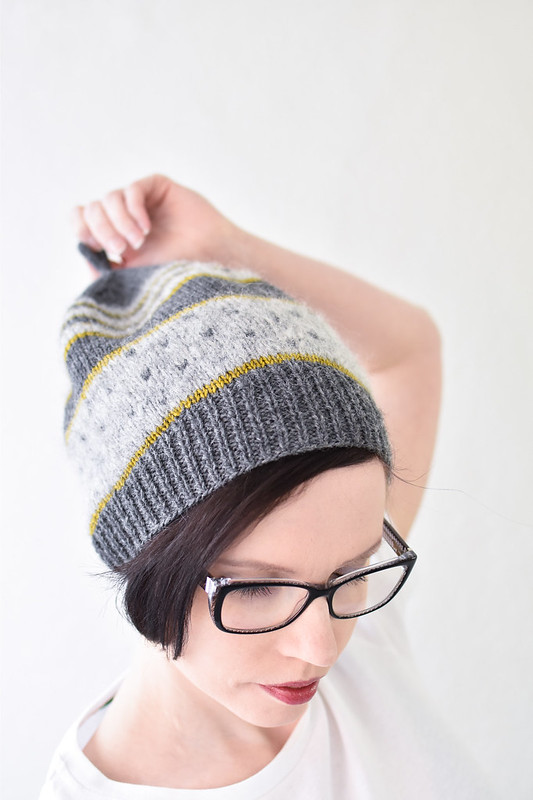 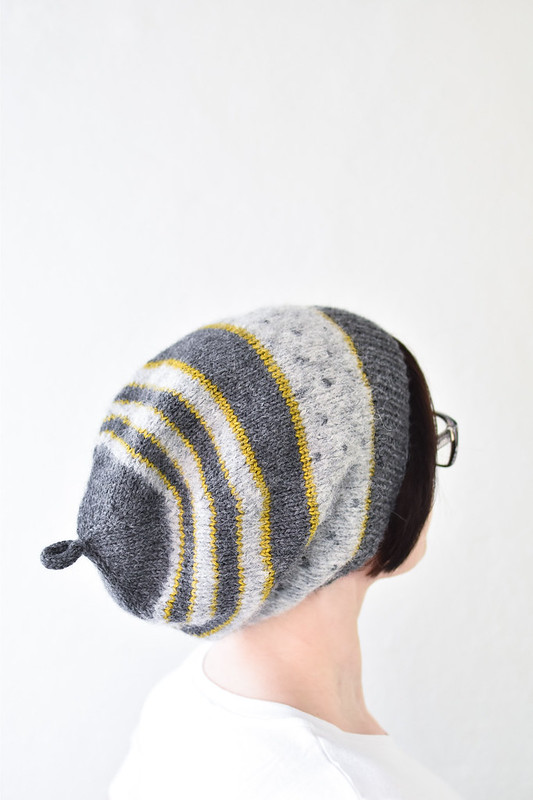 I also had the pleasure of testing La Maison Rililie's latest hat pattern, Zipf. Her patterns often have a slightly unusual construction, and in this case it's short rows that shape the hat! The pattern is written for worsted weight yarn, but my hat is knit with three yarns ranging from DK to bulky! I used the leftovers of Martin's Lab Tibetan DK for the contrast stripes, and actually ran out; the last stripe in this color is missing because of that. The grey yarn is some Berroco Ultra Alpaca from the bottom of my stash, and the fluffy Sandnes Garn Børstet Alpakka is something I haven't used before. I really love the contrast of the fluffy brushed alpaca to the smoother yarns! I knit the size M, and the fit is great! I like my hats to have a snug brim and then a looser body, so my hair doesn't get flattened.
Posted by Helena at 9:31 AM 1 comment:
Email ThisBlogThis!Share to TwitterShare to FacebookShare to Pinterest 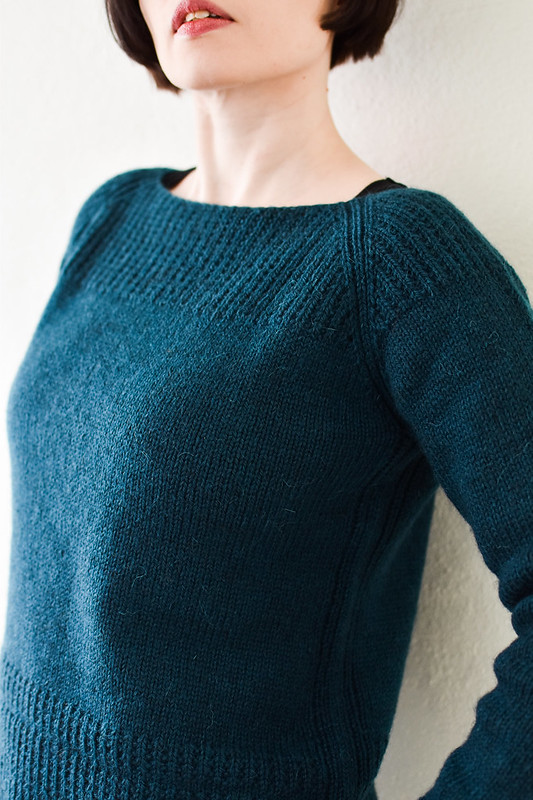 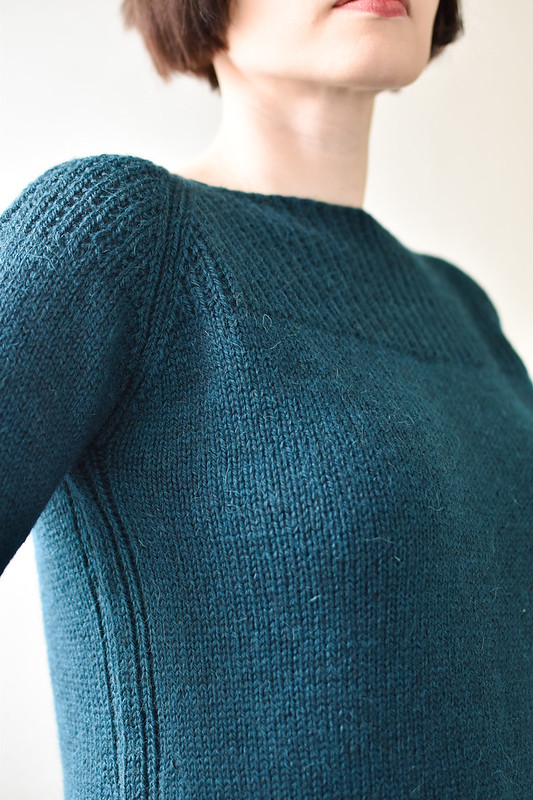 Apparently, besides yarn, I've also started to hoard test knitting projects! Here's the Mycroft sweater, knit from a pattern by Isabell Kraemer. It's actually my first time knitting a pattern by Isabell. The pattern will be released for the Edinburgh Yarn Festival, and I can definitely recommend it! It's a very relaxing knit; apart from the beginning with the neck shaping and such, you barely have to refer to the pattern.

It's written for worsted weight yarn, and I decided to try out Cumbria by The Fibre Co. for the first time. I like the slightly fuzzy surface it creates, although I do have some issues with itching; I think I'll have to wear this with a long-sleeved shirt underneath. It is very warm, and I think it'll be great for wearing under my winter coat.

I'm also very happy with the fit! I knit size M1, although I think my sweater turned out with a slightly smaller bust measurement than intended. There is probably a couple of centimeters/ about one inch of positive ease.

I was slightly worried about having to knit full-length sleeves, considering I've had a pretty strong aversion to sleeve knitting in the past. However, it didn't turn out to be a problem at all, and I churned them out in no time! This makes me quite optimistic about knitting more sweaters with proper sleeves, instead of just trying to find patterns with minimal sleeve knitting involved!
Posted by Helena at 8:43 AM No comments:
Email ThisBlogThis!Share to TwitterShare to FacebookShare to Pinterest

Meet Me At Midnight 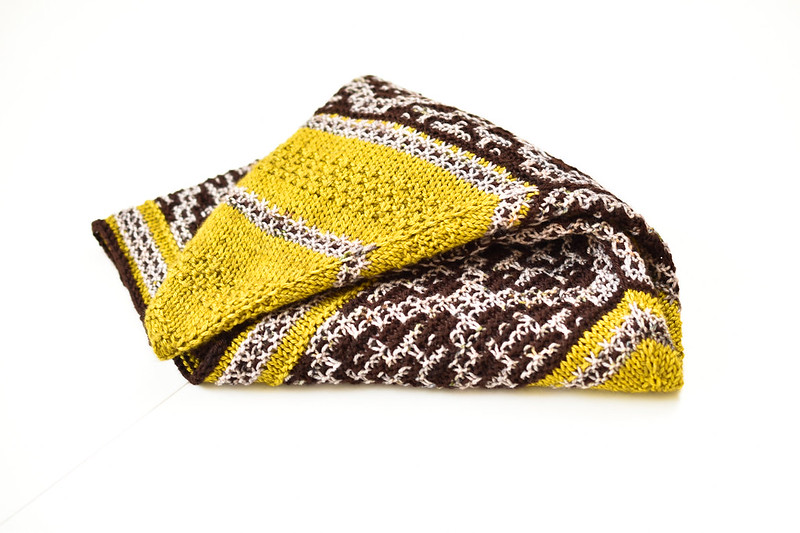 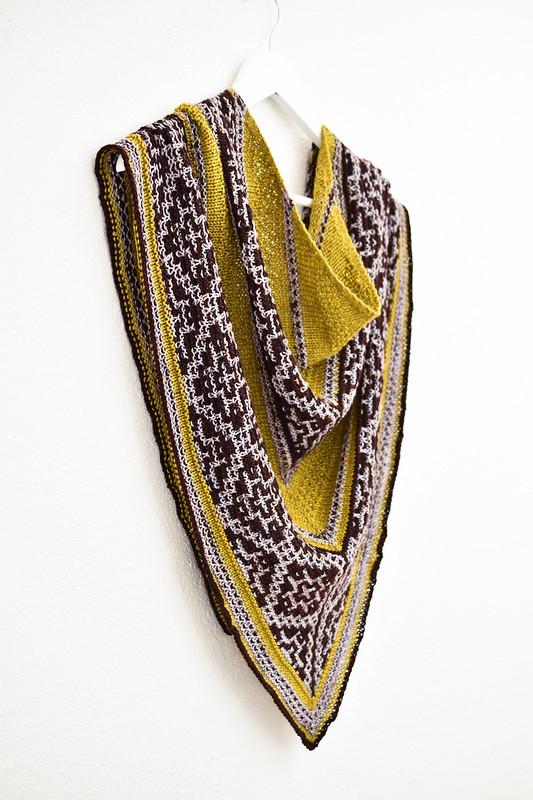 The Meet Me At Midnight shawl pattern by Cheryl Faust was my first time test knitting for her, and actually my first time knitting any of her patterns! It's interesting to patterns from different designers back to back, because they all have their unique way of writing a pattern! While the finished product might be of similar construction than some other designer's shawl, for example, the way the pattern is constructed may be quite different.

The pattern is written for DK weight yarn, but because at the time of casting on in particular I was low on options in that weight range, I used a mixture of DK and sport weight yarns. The yellow-green is Tibetan DK by Martin's Lab, and it's absolutely heavenly! It's soft, shiny and drapy, my first time working with this yarn that I bought from their booth at a Finnish craft fair (Martin is the husband of the Polish designer Justyna Lorkowska). The speckled beige is La Bien Aimée Merino Sport and the dark brown is Wollmeise Blend. I think it worked out quite well that the mosaic sections are knit with slightly thinner yarns!
Posted by Helena at 10:21 AM 2 comments:
Email ThisBlogThis!Share to TwitterShare to FacebookShare to Pinterest
Newer Posts Older Posts Home
Subscribe to: Posts (Atom)