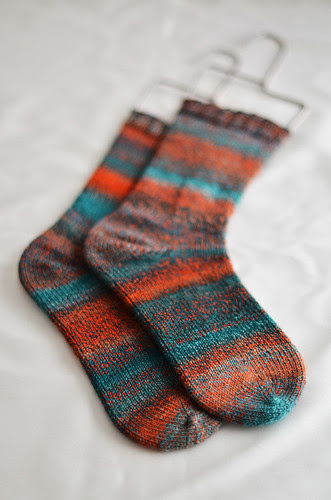 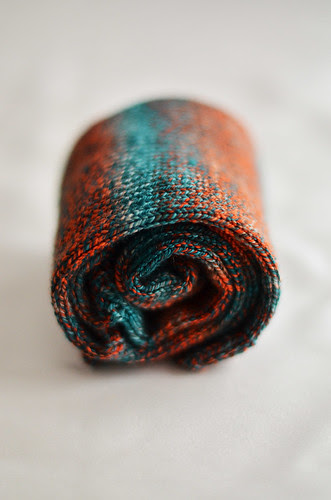 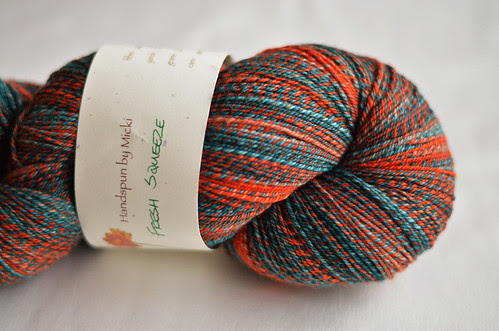 My first project knit with handspun yarn! Not my own handspun, because I'm not capable of doing that, but by Micki (thing4string on Ravelry). I first contacted her in early January, based on a hint I'd received from another Ravelry member, if she could spin some sock yarn to my specifications. The process started with me choosing the fiber (superwash merino) and her dying it based on my wishes. I felt a bit guilty for being so picky about the colors, but she was patient with me. And then she spun the fiber into beautiful 3-ply sock yarn.

When I first had the skein in my hands, I felt it was almost too special to knit with. However, common sense took over, and I convinced myself that the primary purpose of the yarn is to be knit, not adored. I wanted to go for a very simple pattern to give room for the colors, so I cast on a generic pair of stockinette stitch socks. It was interesting to see how the colors behaved when knit into fabric. The yarn is very evenly, professionally spun, with minimal variation in thickness.

In the photos you can also see my first metal sock blockers. I'd been dreaming of simple metal sock blockers for a while, and when I saw these in someone's pictures on Ravelry, I was eventually able to track them down to Webs (after my email inquiry from another store was never replied to) after a helpful hint.

The Ravelry project page
Posted by Helena at 9:39 AM 17 comments:
Email ThisBlogThis!Share to TwitterShare to FacebookShare to Pinterest 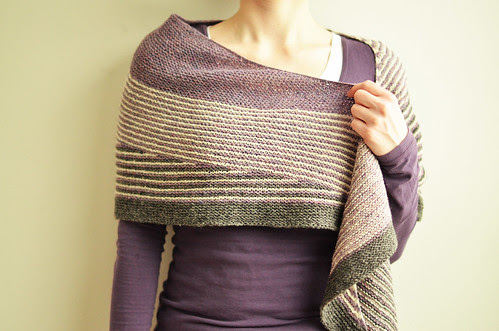 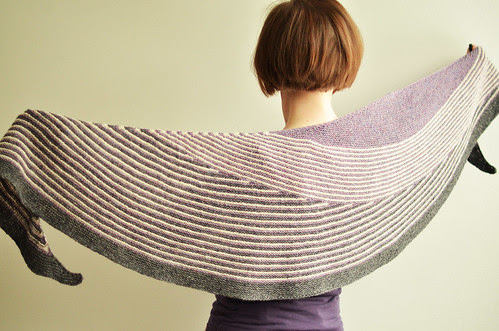 I anxiously waited for this pattern by Veera Välimäki to be released, and cast on almost immediately it was. It's no wonder hundreds of other people have done the same. It's a very cool, geometric pattern to show off various color combinations. My color selection is not the most exciting, but this is going to be a gift, and I will knit another one for myself with more saturated colors.

I'm not 100% sure if my yarn selection of Brooklyn Tweed Loft was ideal for this pattern. My main reason for choosing that yarn was that I happened to have several matching colors (the ones I used were called Blanket Fort, Fossil and Soot) of it available in the right yarn weight. Certainly it produced a lightweight shawl, but it almost looks worn out before it's even been used. It does have decent drape, but I think my yarn choice for the second Color Affection will be drapier and less fuzzy looking. Also, not sure if it was the yarn or what, but this time I ended up using signifigantly less yarn than I was supposed to, and also ended up with a smaller shawl than expected. I didn't think my gauge was that tight.

The Ravelry project page
Posted by Helena at 10:37 AM 15 comments:
Email ThisBlogThis!Share to TwitterShare to FacebookShare to Pinterest 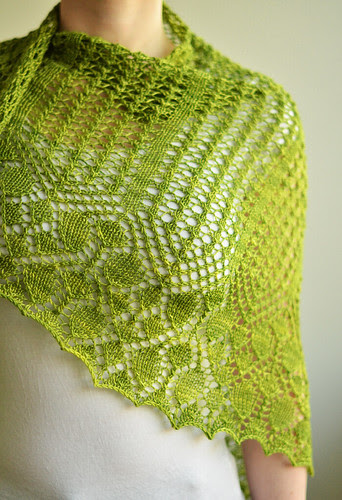 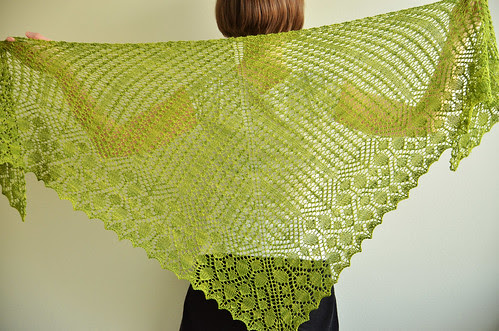 Finally a finished shawl that actually counts toward my official 12 Shawls in 2012 goal! Ysolda's new Sherilyn pattern from the Whimsical Little Knits 3 collection inspired me. It's a great pattern, and I think I want to knit this again some time. I made the larger size, using 563 meters of Malabrigo Sock, almost a hundred meters more than the pattern estimate. My gauge must have been off, because it also turned quite a bit larger than I expected, with a wingspan of 182 cm after blocking instead of the 147 cm listed in the pattern. It didn't feel like I was knitting a big shawl, and it was quite enjoyable all the way through. I definitely recommend this, and it certainly deserves to become just as popular as some of Ysolda's other shawl patterns. It's slightly more difficult than Ishbel or Damson, but once you get going, most of the stitch patterns are quite easy to memorize.