Despite the fact that I'm not exactly short on yarn, a couple of months ago I decided I wanted to go to the Wollmeise fall sale, if for no other reason than to have an excuse to travel. I'd visited the brick & mortar shop a couple of a years ago, but never a special sale. In general, I try to avoid stores during their busiest sales, because I don't enjoy shopping in a crowd, but I decided to step out of my comfort zone for a moment. 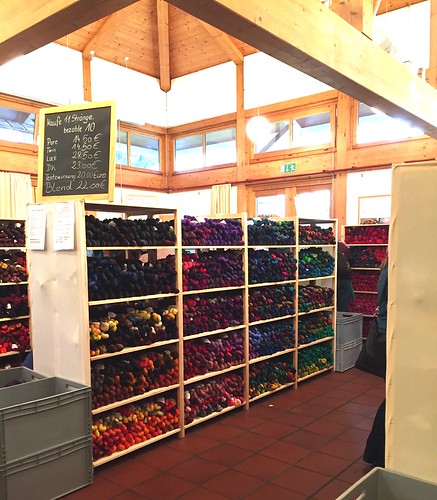 For practical reasons it was most convinient for me to head to the sale on its first day. Luckily I wasn't aware that apparently the first day is usually the busiest! When I got there on Monday just a few minutes after the sale had started, it was already full on. The first few hours were so busy it made browsing slightly difficult, and moving between the shelves was at times impossible. By the afternoon it had cleared up a little bit, and it was more comfortable to shop. I ended up staying for almost five hours, by which time I felt I had found the yarn I wanted, and had had time to think which yarn made sense to buy and which didn't. 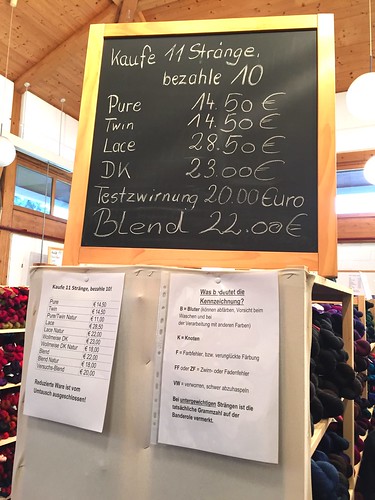 I was a bit surprised that, of Twin and Pure, there were quite a bit more multicolored than semisolid skeins available, and apparently, as the sale week goes on, the portion of multicolored yarn grows even bigger. The best part about being at the sale, versus online shopping, was getting a chance to see all the interesting variations of the colorways. There were so many different versions of some colors available that I could have spent hours just comparing them, had I had the space and energy to take the time to do that. However, at some point I just had to decide that the shopping was done. But I will almost certainly do this again in the future!
Posted by Helena at 11:51 AM
Email ThisBlogThis!Share to TwitterShare to FacebookShare to Pinterest