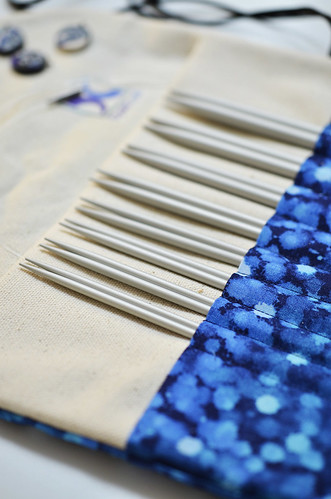 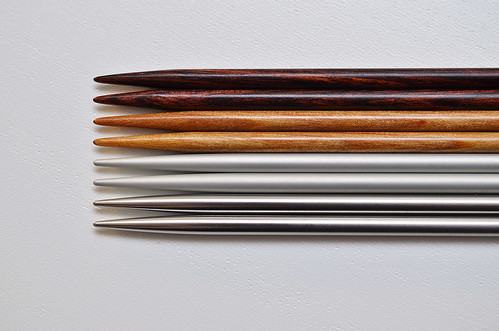 DyakCraft started recently offering Northern Light needles again, and I decided to give them a go. I'd had two set of the previous version of Northern Lights, but back then they didn't grow on me.

This time they are, for now, only available in the silver color. Personally, I don't miss the other color options, because I find myself preferring needle colors that don't clash with the yarn, so that means silver with metal needles, and Chestnut with wooden ones (Darn Pretty). They are available both in the 3.5" and 5" tip lengths, and only as interchangeables, just like before. I only have the 5" version, since that's the length I use whenever possible with their other needles, as well. Hats are pretty much the only thing I prefer working with 3.5" tips, otherwise it's the 5" length, Magic Looped when necessary. With the way I hold the needles, the longer length just feels more pleasant to work with, even though my hands are relatively small.

These needles are very grabby at first. After using them for a little while, some of the grabbiness wears off, but they are still stickier than any other metal needles I've worked with (and there have been a few; I'm not exactly monogamous when it comes to knitting needles, I get around). This can be an advantage, like when working with slippery lace yarn. The needles are also lightweight, so they are great for the kind of patterns where you might be afraid of dropping stitches, like when working cables when you have to let go off a needle regularly. Due to the grabbiness and light weight, these needles stay put. Even though I generally prefer slippery needles, the Northern Lights are growing on me. The swishing sound they make when sliding against each other apparently bothers some people, but, personally, I love it. The tips are also surprisingly pointy; in the second photo you can compare them to regular wooden tips (on top), lace wooden tips (second from top) and Heavy Metal tips (bottom).

For now, at least, these needles are only available in full sets of US sizes 3-10, and 3.25-6.00 metric. They overlap slightly with Heavy Metals, which are my go-to interchangeables for the smaller sizes. Between Heavy Metals and Northern Lights, you're pretty much covered for the metal needle sizes you might need. Based on statistics from my Ravelry projects, I never go below size 2.00 mm, and rarely above 4.50 mm, so the larger sizes don't get a lot of use, but occasionally I use them for something like casting on, so I still like to have some larger needles, just in case.

I'm a long-time fan of DyakCraft needles, and I definitely recommend the Northern Lights. Their shipping times are also a lot more reasonable than the pretty out-of-control waiting times for the popular wooden needles; these shipped in a few weeks.
Posted by Helena at 7:44 PM
Email ThisBlogThis!Share to TwitterShare to FacebookShare to Pinterest