The Curse of The Knitted-On Edging

It's rare that I have a WIP almost a year old, because usually by that time I've either finished the project or deemed it hopeless and frogged it. The rare WIP is a Quill that I cast on last February. I like it too much and have spent too much time on it to give up, but it has one of those things that I loathe knitting: a knitted-on edging. Were it an edging knitted in the round, I would have finished this project long before it came that UFO that, at the back of my mind, makes me feel guilty every time I cast on a new project instead of finishing an old one. I don't like unfinished business, which is why 95% of the time, if I don't feel like knitting something, I frog it, because I know it'll never become anything else than a burden on my conscience. But I feel all hope is not lost, even though thinking of the seemingly never-ending edging makes me shudder. 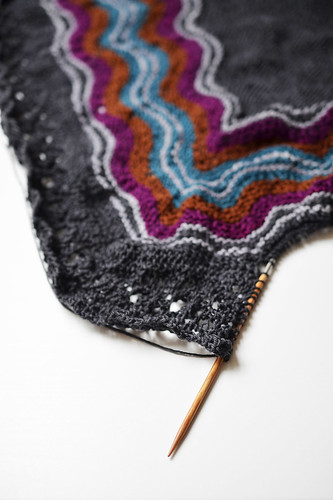 Posted by Helena at 6:56 PM
Email ThisBlogThis!Share to TwitterShare to FacebookShare to Pinterest